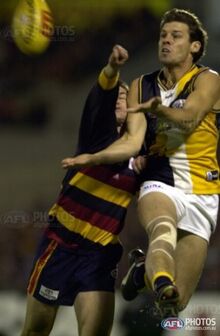 "Ashley McIntosh, switched from full-back to full-forward, kicked three goals in nine minutes in the third quarter, while the reinvigorated Eagles were taking advantage of a strong northerly wind and some defensive errors by the Crows, and seemingly ignoring the wet, slippery conditions.

Adelaide, five goals in front at half-time, was a goal behind 17 minutes into the last term, but McLeod, Goodwin, Ricciuto and Bickley lifted their work-rate again as the home team quickly added 3.4 to nil to clinch its sixth win in nine matches - and leave West Coast rueing its seventh loss in eight games and its first season out of the finals since 1989."[1]

Retrieved from "https://eaglepedia.fandom.com/wiki/Round_19_2000?oldid=32934"
Community content is available under CC-BY-SA unless otherwise noted.