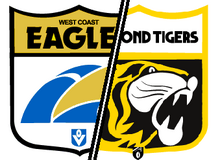 West Coast scored a runaway win over the Tigers, with 12 individual goalscorers contributing to the 48-point victory. David Hart kicked three goals and Guy McKenna two, both from 22 disposals.

"West Coast took the lead midway through the second term, but it was the third quarter, against the breeze, that set it on the way to victory.

Troy Ugle, benched for most of the first half, showed his flair for changing the tide of a game when he kicked three of the Eagles' five goals for the quarter.

Players who were down on form in the first quarter, especially Guy McKenna and Chris Mainwaring, turned the corner to become damaging for the rest of the game."[1]

Retrieved from "https://eaglepedia.fandom.com/wiki/Round_19_1990?oldid=31738"
Community content is available under CC-BY-SA unless otherwise noted.