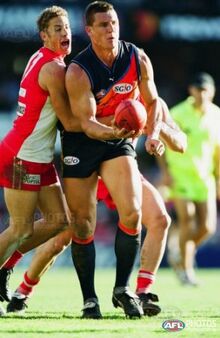 West Coast were never in the match as Sydney celebrated skipper Paul Kelly's 200th game, the Swans extending their lead at every change to record a comprehensive 71 point win in Eagles champion Glen Jakovich's own 200-game milestone. Ben Cousins kicked two goals from 26 possessions and Chad Morrison racked up a big 35 disposals.

"Another important contributor was Adam Goodes, who ensured that Eagles' champion Glen Jakovich would have far less cause than Kelly to remember his own 200th game.

Early in the match, Goodes ran Jakovich up the ground, allowing the Swans' small forward line room in which to work. Later, Goodes became more than just a decoy, kicking four goals and winning his share of contests.

For the Eagles, only the creative Ben Cousins and Chad Morrison offered much resistance for a team that has lost its past six games and is now almost certain to miss the finals for the first time in a decade."[1]

Retrieved from "https://eaglepedia.fandom.com/wiki/Round_17_2000?oldid=32928"
Community content is available under CC-BY-SA unless otherwise noted.