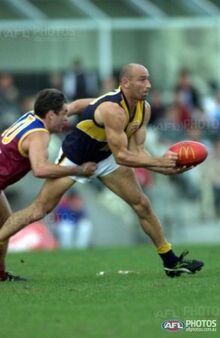 Brisbane handed West Coast a triple-figure thrashing on a sodden Gabba, kicking 10 goals in the first quarter (one more than the Eagles managed for the entire game) to have the game sewn up before the term ended. Peter Matera kicked two goals from 29 touches to be one of few winners from among the Eagles side.

"Malthouse swung his side around to little effect, as Brisbane, by contrast, could afford to rest its midfielders at various stages after the margin blew out to 71 points at half-time.

The AFL's leading goalkicker, Scott Cummings, was completely shut out of the game by Justin Leppitsch, finishing on the bench late in the third term with one behind to his name and a worrying hamstring injury.

Chris Scott hovered between half-back and half-forward to pick up plenty of hard balls, but it was Brisbane's ability to share the goalkicking that finished it off, overwhelming the best defence in the league."[1]

In the lead-up to the round the following players were listed as injured:[2]

Retrieved from "https://eaglepedia.fandom.com/wiki/Round_17_1999?oldid=33230"
Community content is available under CC-BY-SA unless otherwise noted.