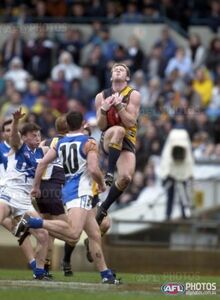 "Jakovich, one of his team's best with 25 possessions, was under increased pressure throughout the game as the Kangaroos' dominance became more pronounced. What was a tight contest for half a match turned into a last-quarter debacle when the Eagles caved in and the Kangaroos at one point kicked nine goals on the trot and outscored the Eagles nine goals to two after half-time.

With rain sweeping Subiaco for most of the first half it was never going to be pretty and that is how it proved. The Eagles dominated the first 10 minutes of the match but got little scoreboard reward for it and finished the first quarter with 1.5."[1]

Retrieved from "https://eaglepedia.fandom.com/wiki/Round_16_2000?oldid=32920"
Community content is available under CC-BY-SA unless otherwise noted.