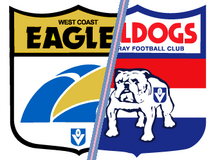 West Coast did it easily over the visiting Bulldogs, kicking five goals to nil in the first term and running out comfortable 43-point winners. Chris Mainwaring had the ball on a string with a career-high 45 possessions and Peter Sumich booted six goals.

"West Coast made a whirlwind start to the game, charging through the centre at every opportunity and feeding full-forward Sumich on the lead. Sumich, so formidable in his home city, had four goals to his credit on Campbell before quarter-time.

Footscray had opportunities, particularly early in the piece, but kicked inaccurately.

Sumich's four first-quarter goals all came in the opening 20 minutes. The first was the result of a strong mark, the second - a trifle lucky - came after he nudged Campbell out to mark.

Two excellent passes set him up for the third and fourth goals, with Campbell having no chance of intercepting."[1]

Retrieved from "https://eaglepedia.fandom.com/wiki/Round_16_1990?oldid=31735"
Community content is available under CC-BY-SA unless otherwise noted.