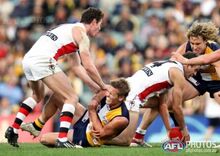 West Coast had their work cut out against an unbeaten St Kilda but gave the Saints a scare, drawing level at three quarter time before the ladder leaders kicked away in the final quarter to win by 20 points. Adam Selwood led the Eagles with 29 possessions and Darren Glass was his usual rock in defence.

"To three-quarter-time, the Eagles who play in Perth continued to outshine the West Coast that leaves Western Australia every other week, as they stood toe-to-toe with the flag favourites and entered the last quarter on equal footing.

With the Saints obviously feeling the effects of their clash of the titans against Geelong, and West Coast successfully countering many of St Kilda coach Ross Lyon's front-line weapons, the locals sensed blood and the visitors looked tired.

But within eight minutes, St Kilda had put the game away with four goals that both proved what it has, and what the Eagles lack.

After Robert Eddy's early major, Nick Dal Santo pounced on Shannon Hurn's errant kick-in to finally make the home side pay for its continued errors by foot. Two more goals followed from Eddy and Stephen Milne, and perfection was maintained, albeit with a few more dents."

Retrieved from "https://eaglepedia.fandom.com/wiki/Round_15_2009?oldid=23986"
Community content is available under CC-BY-SA unless otherwise noted.