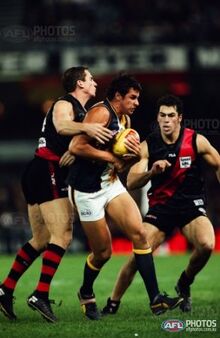 West Coast were beaten but not disgraced by the undefeated Essendon, falling by 32 points in a game memorable for Kevin Sheedy's throat-slitting gesture towards Mitchell White at halftime. Sheedy was fined $7,500 following the incident, which had come about after Bomber Mark Johnson had been bloodied in an off-the-ball clash which Sheedy sarcastically suggested had involved a seagull colliding with Johnson. White kicked three goals from 16 possessions and Andrew Donnelly had 30 touches and 14 marks playing loose across half-back.

"The Eagles provided the Bombers with one of their more tenacious battles in the third term; each time the Bombers edged ahead, West Coast managed to sneak forward and find goals of their own, niggling so effectively that even Lloyd was convinced to join in a brief goal-square scuffle.

But the Bombers, able to find answers when they need them, remained relatively calm and went on to secure a 32-point win. When the pressure came on this time, they absorbed it. One of the Eagles' best, Phil Matera, slotted through his fourth goal in the dying moments but the quiet Steve Alessio and Mark Mercuri had already found goals at their end, and the scarves had already started waving.

The seemingly inevitable Essendon revival came less than two minutes into the second term when Alessio grabbed the ball from the ruck, spun around and snapped the ball through for a goal."[1]

Retrieved from "https://eaglepedia.fandom.com/wiki/Round_15_2000?oldid=32919"
Community content is available under CC-BY-SA unless otherwise noted.