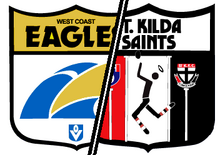 "While Ugle was on the receiving end of great midfield work, mainly from Craig Turley and skipper Steve Malaxos, he earned his stripes with several courageous marks in the heart of the unforgiving Saints backline.

His four goals in the last quarter when the match hung in the balance dumped the Saints to eighth place on the ladder and, probably, another idle September.

Ugle was beautifully offset by the flashy Karl Langdon (three goals), who was helped from the ground late in the third quarter with blood streaming from his face.

To his credit, Langdon returned for the last skirmish, kicking the last goal of the match, after a feed from Ugle."[1]

Retrieved from "https://eaglepedia.fandom.com/wiki/Round_15_1990?oldid=31718"
Community content is available under CC-BY-SA unless otherwise noted.