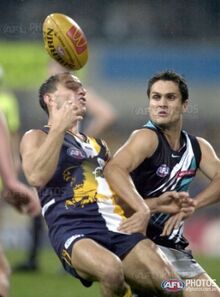 West Coast started well in the wet but faded badly to slump to a third straight loss and fall out of the eight, with Port kicking 13 goals to three in the second half. Youngster Andrew Embley provided one bright spark with four goals and Chad Morrison racked up 31 possessions.

On a wet and slippery night at Subiaco Oval, lowly Port Adelaide staged a thrilling comeback to post 13 goals to three in the second half on its way to a historic first victory over the 1990s powerhouse.

Irate Eagles coach Ken Judge labelled the 16.11 to 10.11 loss an "embarrassment" for the club and raised doubts about its ability to play finals football."[1]

Retrieved from "https://eaglepedia.fandom.com/wiki/Round_14_2000?oldid=32918"
Community content is available under CC-BY-SA unless otherwise noted.