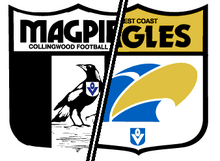 West Coast got out to an early lead but thereafter allowed Collingwood to take control of the match and cruise to victory, with the 32-point margin not reflecting the Magpies' dominance. Dean Kemp was one Eagle to stand up with 29 disposals and nine marks.

"By the end of the second quarter, the Collingwood defence had totally shut out the Eagles' forwards. And turned defence into attack, which was typified by defender Shane Morwood's goal 24 minutes into the term. Morwood ran from the wing, gathered the ball and kicked a wobbly torpedo punt goalwards. Long and flat, the kick tumbled over the goal line and the Maggies were 15 points up. More comfort for Collingwood followed with Daicos' fifth goal just before the interval.

The third quarter was Collingwood's from the start. When Darren Millane kicked the Magpies' 11th goal 12 minutes into the quarter there was a real chance that the Eagles were going to be humiliated. Collingwood had scored the last nine goals and the opposition was looking for places to hide.

Millane's goal summed up both his own game and that of his team. A Brown handpass found him 50 metres from goal, seemingly trapped by Wilson and Ugle. But with superb poise, he eluded both opponents, steadied, bounced the ball, and goaled. Great stuff."[1]

"West Coast kicked with a strong breeze in the first term and led by 10 points at the break. Within three minutes of the start of the second term it extended the lead by another goal, but from then Collingwood fired and had added 9.6 points before the Eagles scored their next goal, just before the time-on period in the third term.

The Magpies played intelligently with the wind and halted Eagles' attacks when kicking against the breeze with short play along the flanks."[2]

In the lead-up to the match the following players were listed as injured or unavailable:[3]

Retrieved from "https://eaglepedia.fandom.com/wiki/Round_14_1990?oldid=31717"
Community content is available under CC-BY-SA unless otherwise noted.