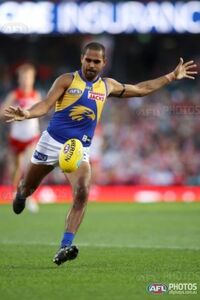 West Coast's winning streak came to a shuddering halt and its SCG hoodoo remained firmly intact with a disappointing loss to the Swans. The home side kicked two goals in two minutes to signal their intent, and extended their lead at every change despite losing several players to injury as the Eagles limped into the mid-season bye. Andrew Gaff had a team-high 28 possessions and Josh Kennedy kicked three first-half goals while the game was still in the balance.

Both sides went in as named, after swinging some changes earlier in the weekend. The match was played in fine conditions.

"Effort is one thing, but I think the old adage ‘Don’t get beaten by what you know’ probably comes to mind. We planned a lot about what we thought Sydney would do and they executed their plans a lot better than we did ours.

"Buddy is at the centre of what we know. For us, some of the numbers if you look at them on paper, you would go 'We’ll take a lot of those numbers’. The contest was pretty even, inside 50s we were plus-12. But they kicked 10 goals from our front half, so that’s an indication of how we defended behind our entries. We’ll look at that. We’re 8-4 and we’re really disappointed tonight. The effort was inconsistent but it was probably more the execution of our plans were not up to scratch. And geez, I’ll tell you what, Sydney played really well. They had injuries left, right and centre – I think they had one player available (on the bench) in the last quarter and a half. To do what they did, they would be very proud and we are disappointed.

"...Our defenders lowered their colours tonight, but we didn’t help them up the ground. It’s a combination of both. Some individuals for Sydney were really good and some of our boys were off. Pretty much every line, their colours were lowered."[2]

"The visitors, who sorely missed injured captain Shannon Hurn and two-time club champion Elliot Yeo, reduced the margin to 19 points early in the third term but it was the closest they came to hitting the front after halftime.

Franklin, who underwent off-season groin surgery and missed rounds 6-9 because of a hamstring injury, set the tone when he booted Sunday’s opening goal after marking on the lead.

The 32-year-old, featuring in his 298th match, repeated the dose in the second term when he broke free from Jeremy McGovern and slotted the subsequent set shot from beyond the 50m arc.

"The Swans stormed out of the gates, kicking the first three goals of the match to establish an early 17-point lead. It evaporated in a flash. It took West Coast until the 18th minute to register their first major, through Josh Kennedy, who kicked another moments later from almost the exact same spot, and then had a hand in the lead-up play that set up Liam Ryan.

Those three goals came in a four-minute stretch, and it felt like a warning for Sydney at the time. In the end, it was the only period of the game in which the Eagles looked remotely threatening.

Kennedy finished with three goals and, one-on-one, had the better of Dane Rampe in his 150th game, but the milestone man was still able to celebrate.

The Swans broke the game open in the third quarter, kicking five goals while restricting West Coast to just 1.5, and had their tails up from then on."[4]

West Coast fell to West Perth at a wet Arena Joondalup, managing just four goals and dropping to the bottom of the ladder. Matthew Allen had a career-high 34 possessions, 25 of them coming in the first half, and ruckman Keegan Brooksby tallied 48 hitouts and eight tackles to go with his 22 disposals.

Retrieved from "https://eaglepedia.fandom.com/wiki/Round_12_2019?oldid=31931"
Community content is available under CC-BY-SA unless otherwise noted.