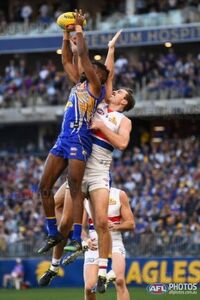 West Coast extended its winning streak to five games and moved into the top four after a second-half demolition of the Bulldogs at Perth Stadium. The visitors controlled play for lengthy periods of the first half and only trailed at half-time due to their inaccurate kicking, but the Eagles put the game out of reach with a nine-goal third term. Jack Darling equalled his career high with six goals, and Jake Waterman kicked three goals from 22 touches in a breakout performance.

Both sides went in as named. The game was played in fine and sunny conditions.

"I thought in the second half we put the foot down and found a way through, but the first half in particular was really difficult and challenging. The way the Bulldogs play, our execution, what they denied us and then working through that as a mature team - and we're a bit more mature team than the Bulldogs - so, pleased to get the result, but still work to do.

"That third quarter for us was more of a complete performance, with the way we won the ball in the contest, kept it in our front half, the way we moved the ball as well complemented our contested ball. Getting all three phases right is something we haven't done a lot. It's hard to do, across the board. We didn't cash in, but we made them pay.

"...The more supply we get to JD and JK, the more you'll see them score. (Darling) won and halved many contests tonight. But I think we probably had a bit more supply. We might've had more than 50 inside-50s for the first time, albeit not many. And the way he competed and finished off his work and the supply was good for him."

"The Bulldogs looked the better team in the first quarter, but their wayward return of 2.7 (19) meant scores were level at the first break.

Kennedy booted the first goal of the quarter, and two feats of strength from Darling resulted in two goals.

Waterman added the cherry on top with a three-goal burst that extended the margin to 49 points at the final change."[2]

"Most of the Eagles forwards took their chance to hit the scoreboard multiple times, Jack Darling filling his bag with six goals, as Andrew Gaff led the midfield with 36 touches.

It was three goals in as many minutes from Jake Waterman just before three-quarter-time though that blew the margin out to 49 points and snuffed out any chance of a Bulldogs victory.

The Dogs had led by six points, seven minutes into the second quarter after Aaron Naughton marked and kicked their third goal.

But the Eagles kicked four goals in nine minutes before the end of the second term to lead by 11 points at the main break. And that was just a glimpse of what was to come."[3]

West Coast's reserves fell to Claremont at Perth Stadium in a curtain-raiser to the AFL clash, narrowing the margin to 11 points at the final change before the Tigers pulled away in the last term to win by 31. Chris Masten had 30 touches on his return to action and Nicolas Reid kicked three goals.

Retrieved from "https://eaglepedia.fandom.com/wiki/Round_11_2019?oldid=31930"
Community content is available under CC-BY-SA unless otherwise noted.