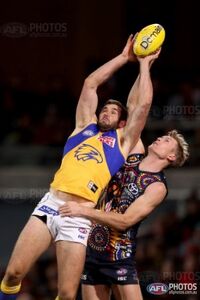 West Coast set up their season nicely with an impressive come-from-behind victory against the Crows in Adelaide. The Eagles were badly outplayed in the second term and trailed by as much as 33 points during the third quarter but pegged their way back and forced the Crows into an arm-wrestle, ultimately prevailing by 12 points. Midfielders Elliot Yeo and Jack Redden each recorded 15 tackles, and Luke Shuey had 10 along with 33 possessions and some crucial late clearances.

Adelaide were forced to replace David Mackay with Riley Knight. Rain fell earlier in the day but generally stayed away during the match, though the game was played in wet and slippery conditions. Although it was Sir Doug Nicholls Indigenous Round, West Coast wore their standard gold clash jumper due to a deemed clash between the sides' respective indigenous guernseys.

Both sides spent several minutes trying to adjust to the conditions before Cam Ellis-Yolmen opened the scoring, collecting the ball at a forward stoppage and snapping truly. Rory Sloane added a second goal shortly afterwards after cutting off a scrambled Gaff kick out of defense. Adelaide continued to press and a quick snap by Elliott Himmelberg out of the ruck went wide. West Coast finally went forward and Kennedy tried to soccer a loose ball through but it dribbled out of bounds. Sheed gathered the ball from the throw-in but his shot went wide for a minor score to open the Eagles' account. Sheed scored his side's first goal several minutes later, getting on the end of a chain of handpasses and drilling the ball from 50 metres.

Crows defender Rory Laird headed to the bench with an ankle injury as the Eagles went forward to score their second, Waterman hacking the ball off the deck to the goalsquare where Kennedy gathered and handed off to Petruccelle for the easy conversion. Adelaide pushed but Duggan was able to spoil a long kick over the behind line. Hurn went straight up the ground with the kick-in and the ball ended with Rioli, who pulled his set shot left after a juggling mark, leveling the scores. Sheppard intercepted a clearing kick by the recovered Laird, and had a rare set shot from inside 50 but it faded to the right. Gaff was collected (legally) by Ellis-Yolmen in a marking contest, taking his time to shake off the heavy contact. Ryan pumped a ball long to Darling in a one-on-one contest, and the forward was able to gather the ball off the deck and kick truly off his left. That was the final score for the term, with the Eagles leading by 7 at the first change.

Adelaide created the first real chance of the second quarter when a scrambled defensive kick by Duggan was chopped off by Ellis-Yolmen, but his quick snap went wide. The match was played between the 50m arcs for several minutes before Yeo won a holding-the-ball free kick and found Sheed, but he was unable to score more than a behind. Adelaide created repeat forward entries and eventually found Wayne Milera, who kicked truly from the boundary line only to hgave the goal disallowed for interference by Taylor Walker on the goal line. Milera had another chance shortly afterwards, beating McGovern in a marking contest in the forward pocket and converting with a right-foot banana to narrow the margin to one point.

Milera put the Crows ahead after Eddie Betts won a ground-ball contest against Shepherd and handballed to him in the goalsquare. As the floodgates began to open, Brodie Smith kicked truly from outside 50 but a fingertip from Cole on the line meant it was only a behind. The Crows added another behind through Brad Crouch as McGovern went from the ground following a heavy clash. Hurn tried to punch through a kick from Paul Seedsman but didn't make enough contact and Rory Atkins was able to soccer through a goal. Adelaide continued to dominate the centre clearances as Seedsman ran around Duggan on the mark and dobbed one from 50 metres. Lachlan Murphy gathered the crumbs from a marking contest and kicked around the body for another goal, pushing the margin to 26 points. Ellis-Yolmen had a chance to kick another after marking inside 50 but pushed his shot to the right. Adelaide pressed again in the final minute but the Eagles' defence was able to rush a behind, leaving the margin at 28 points at the long break after a goalless second term for the visitors.

"I think there’s evidence there that we’ve got pretty good resilience amongst our players over the course of the last 18 months. I’m really proud of what they achieved tonight. Really, that second quarter though was a major concern, so we need to look at that a lot because our best is as good as anyone and our worst is as bad as anyone. For a quarter Adelaide were ruthless with the way they went about it and we just couldn’t keep up. But at half time we adjusted a few things, but really our players just got a lot tougher. We had to adapt to the conditions and the environment. In the first quarter I thought we started pretty well and we fought it out, but that second quarter was a real concern and the second half was tremendous.

"When you’re 0-5 or 0-6 (for centre clearances in the second term), a lot of your ball movement is from right back on the goal line. People suggested our ball movement is our brand and what we do with it, but if we don’t win the ball – and I’ve said this a number of times this year – we’re not going to get the game played in our half, and it happened again tonight.

"...We challenged our players probably a month ago that we need to get our hands dirty a bit more. The numbers probably don’t suggest it if you just look at contested ball, but our intent and effort has been there for the most part. It wasn’t there in the second quarter, but I think our numbers from a tackling point of view – though it’s not a massive stat for us – we had a go in that area."[2]

"Shuey’s supreme second half fuelled the comeback though, having 21 touches and seven clearances after the major break in an awesome display in the engine room.

The Eagles kicked 10 goals to three in the second half, climbing from the canvas just as Gaff, who also starred with 33 possessions, had done in the first quarter in a moment to inspire.

It was the kind of day where nothing less than full commitment would do and Gaff showed the way as he fearlessly went back with a high ball before being cleaned up by Cam Ellis-Yolmen.

Defender Brad Sheppard was outstanding early as the Eagles quickly recovered from conceding the first two goals to take a lead to the first change."[3]

"The Eagles had Adelaide pinned in their back half regularly early before seeing their seven-point quarter-time lead turn into a 28-point deficit as the Crows completely dominated the second term.

Amazingly, West Coast failed to notch a single centre clearance for the term. But the reigning premiers, with their four-match winning streak on the line, refused to lie down.

They awoke from their half-hour slumber to dominate the third term before pinching the lead when Jamie Cripps snapped truly early in the fourth.

A depleted West Coast fell to Swan Districts at Bassendean, with inaccurate kicking playing a part as the home side opened up a handy lead early in the final term and then held on as the Eagles made a futile late charge. Livewire forward Jarrod Cameron kicked four of his team's seven goals and Josh Smith had a game-high 28 possessions on a wing.

Retrieved from "https://eaglepedia.fandom.com/wiki/Round_10_2019?oldid=31929"
Community content is available under CC-BY-SA unless otherwise noted.