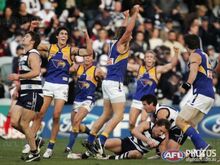 The comeback game. Geelong led by 54 points midway through the third quarter before West Coast went on a remarkable run to hit the front in time on in the final quarter. The Cats gained back the lead but Adam Hunter, with his head swathed in bandages after being shoved into the concrete dugout by Cameron Mooney earlier in the match, kicked the match-winner. Star midfielders Daniel Kerr and Ben Cousins led the comeback with good support from Mark Nicoski and Chad Fletcher.

Lynch had the first opportunity to hit the scoreboard but his rushed shot missed to the left. Jarad Rooke found Cameron Mooney inside 50 but he pushed a set shot wide to the right to level the scores. On the way out of defence, Hunter attempted a mark over the boundary line and was spoiled by Mooney, pushing the Eagles' defender into the players' dugout and bloodying his head. Ottens attempted a long shot at goal but could only score a behind. West Coast struggled to bring the ball out of defence in a tricky breeze, and Gary Ablett was able to wrong-foot his opponent and kick the game's first goal. Ablett then ironed out Wirrpanda but the defender jumped straight back to his feet. West Coast went forward and Cousins was able to find some space and goal. Paul Chapman answered quickly at the other end to push the margin back to seven points. Geelong went forward from the bounce and Steve Johnson kicked Geelong's third.

"Geelong had first use of a three-goal breeze and by quarter time led by 31 points. They stretched that margin to 39 at the long break and when Mooney booted his third goal midway through the third term, the Cats had rocketed 54 points up.

There were no signs of what lay ahead until a late-term rally aided by free kicks to Rowan Jones, Dean Cox and Quinten Lynch, which all resulted in goals. Suddenly the Cats froze - and stopped.

Geelong started to look tired, made blunder after blunder and the Eagles realised they had a sniff."[1]

"The Eagles kicked 12 goals to five after half-time, seven of which came in the last when the Cats could manage only one - a late goal to Nathan Ablett to snatch back the lead at the 23-minute mark.

The resulting roar that erupted around Skilled Stadium lasted all of three minutes, but the Cats could only watch in dismay as Adam Hunter, who'd had a torrid day to that stage and the bandages on head to prove it, snapped the winning goal after a brilliant over-the-head handball from Daniel Kerr.

Five minutes earlier it was Kerr who put the Eagles in front. His run from half-back to get on the end of a pass from Brent Staker in the forward pocket was a lesson to any footballer about how the luckiest (and best) players are the ones who work the hardest."[2]

Retrieved from "https://eaglepedia.fandom.com/wiki/Round_10_2006?oldid=32510"
Community content is available under CC-BY-SA unless otherwise noted.