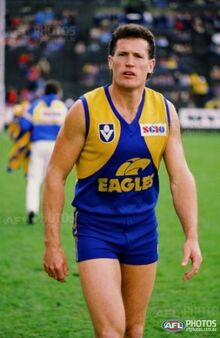 West Coast’s inaugural captain, Ross Glendinning was a champion footballer at North Melbourne before coming home to lead the fledging club at the end of his career.

Glendinning played four seasons for East Perth before crossing to North Melbourne for the 1978 season. The versatile key position player played 190 games in nine seasons with the Kangaroos, winning the Brownlow Medal in 1983 and back to back club best and fairest in 1982 and 1983.

At the end of the 1986 season he was lured back to WA by the prospect of captaining the new West Coast Eagles side. The Eagles’ star signing played 21 games in the 1987 season, leading the club goalkicking despite spending extended time at centre-half-back and finishing runner-up in the Club Champion award to Steve Malaxos.

Playing as a permanent forward in 1988, Glendinning kicked 73 goals for the year, finishing third in the Coleman behind Dunstall and Ablett. His hauls included a seven-goal effort against the Bulldogs and five more bags of half-a-dozen. He had 30 goals in the first six weeks of the season, and kicked five in the club’s first final against Melbourne at Waverley.

Glendinning retired at the end of the 1988 season, having successfully led the club for two seasons.

In retirement, he has been honoured by induction to the AFL Hall of Fame and being named in North Melbourne’s Team of the Century. After a stint as a director at Fremantle, he was recognised for his contribution to both WA clubs by having the best-on-ground medal for the Western Derby named in his honour. Glendinning has returned to West Coast as Manager of Corporate Relations.

Retrieved from "https://eaglepedia.fandom.com/wiki/Ross_Glendinning?oldid=22896"
Community content is available under CC-BY-SA unless otherwise noted.