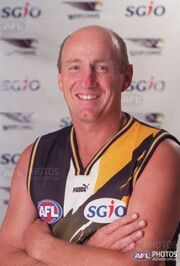 A champion WAFL and VFL footballer long before West Coast came along, Rob Wiley won five consecutive best and fairest awards and two premierships with Perth in the 1970s before heading to Victoria to play for Richmond. He returned to Perth and later formed part of West Coast's inaugural squad.

The speedy rover played 95 games for Richmond and won a premiership medal in 1980 before heading back to Perth for the 1984 season.

After three years at Perth yielded three more best and fairests, West Coast had little hesitation in adding him to its foundation squad despite Wiley turning 32 before the start of the season. The move paid off, with Wiley’s footy smarts proving invaluable in his 18 games.

Unfortunately, West Coast only saw a season of him (as a player at least) with Wiley stepping down at the end of the 1987 season to serve as playing coach of Perth.

Wiley returned to the club to serve as assistant coach under former Richmond teammate Mick Malthouse, staying with the club for a considerable period before moving on after the 2006 grand final.

After a stint coaching junior state sides, Wiley rejoined Malthouse at Carlton as director of coaching and development. He returned to WA ahead of the 2016 season to take the reins as senior coach at East Fremantle.

Retrieved from "https://eaglepedia.fandom.com/wiki/Rob_Wiley?oldid=22509"
Community content is available under CC-BY-SA unless otherwise noted.