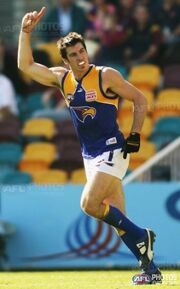 Cult figure Quinten Lynch was a strong yet mobile key forward who was an unfashionable but effective spearhead in the club's 2006 premiership campaign.

Surprisingly overlooked in the 2001 "superdraft" despite being selected at centre-half-back in the under 18 All-Australian side, country boy Lynch was picked by West Coast in the 2002 rookie draft. He was elevated to the senior list mid-season in place of the injured Phil Read and made his debut as a forward target. After kicking five goals against Carlton in his second AFL game he remained in the side for most of the rest of the year, including the elimination final against Essendon, finishing his debut season with 17 goals from 11 games.

Promoted to the senior list in 2003, Lynch couldn't break into the side, spending the season with West Perth where he played in the Falcons' premiership side. A shift to defence in 2004 proved successful, with Lynch holding down centre-half-back after the retirement of Glen Jakovich. He played 22 of a possible 23 games, his sole omission coming as the result of an internal suspension after an ill-advised decision to run away from a random breath test.

Moving back into the forward line in 2005, Lynch played every home and away match, with his 31 goals second behind Phil Matera. After failing to score in the first final against Sydney, however, he was dropped for the preliminary final in favour of Travis Gaspar. With both Lynch and Matera (injured) absent for the Grand Final, the Eagles managed just seven goals en route to a 4-point loss.

Redemption came in 2006 with Lynch playing every game and proving an effective (if unfashionable) spearhead, his 65 goals the most by an Eagle since Scott Cummings' Coleman Medal-winning year in 1999. His hauls included a career-best 8 goals against Brisbane at the Gabba and half a dozen in a semi-final win over the Bulldogs. Fast becoming a cult figure with his hulking frame, distinctive facial hair and trademark glove that he removed theatrically for set shots, the burly Lynch kicked three goals in the side's Grand Final win over Sydney.

Lynch kicked 52 goals in 2007, with a haul of seven against Richmond and a few bags of five. In 2008 he added another string to his bow as the league's biggest midfielder, the 100kg-plus giant regularly lining up on a wing as the team looked to a smaller forward line with Ben McKinley and Mark LeCras. The moved had some success, with the popular Lynch finishing second in the Club Champion award behind All-Australian ruckman Dean Cox.

He backed that up with a fourth-place finish in 2009, mixing up his time between the forward line, midfield and even backing up rookie Nic Naitanui in the ruck late in the season with Cox injured and Mark Seaby out of favour. The "Q-stick" achieved life membership with his 150th game in the final round of the season.

A 95-game consecutive games streak came to an end in the second week of 2010, Lynch dropped as the club trialled Mitch Brown as a forward. He returned after over a month out but struggled for form, finishing the year with just eight goals from 14 games.

With his career on the line Lynch found some of his old form in 2011, playing almost every game and kicking 28 goals as an effective foil for emerging spearhead Josh Kennedy and prolific small forward LeCras.

Despite kicking 33 goals in 2012 in the absence of LeCras and, for most of the year, Kennedy, Lynch could probably see the end coming when he was dropped to make way for the returning Kennedy in the final round of the year. Although he was recalled for the finals, his minutes were limited and with his contract up and free agency introduced, Lynch signed a deal with Collingwood, becoming the first player to leave West Coast through free agency. He finished with 281 goals from 209 Eagles games, at the time sitting third overall for West Coast behind Peter Sumich and Matera.

Lynch played 18 games for the Magpies in his first season, generally as a backup ruckman. He failed to add to that tally in 2014, and announced his retirement at the end of the year.

Lynch returned to Western Australia and signed as playing-coach of amateurs side Trinity-Aquinas,[1] where he remains as of 2017.

Retrieved from "https://eaglepedia.fandom.com/wiki/Quinten_Lynch?oldid=27992"
Community content is available under CC-BY-SA unless otherwise noted.