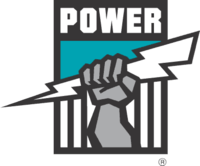 Formed in 1870, Port Adelaide is the most successful club in the South Australian National Football League, winning 36 SANFL premierships. The club entered the AFL in 1997, changing its nickname from the 'Magpies' to the 'Power' and changing its colours, both at the behest of Collingwood. The club continues to field a Magpies team in the SANFL. Since entering the AFL Port has won one premiership, in 2004.

Retrieved from "https://eaglepedia.fandom.com/wiki/Port_Adelaide?oldid=32695"
Community content is available under CC-BY-SA unless otherwise noted.