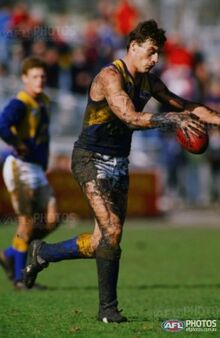 The popular Phil Scott was a useful ruckman and pinch-hitting forward in West Coast’s early years.

Scott won a premiership with Subiaco in 1986 before joining West Coast's foundation squad. He played just 9 games in the 1987 season, but became a mainstay in the ruck in 1988 alongside Laurie Keene and Alex Ishchenko. He played 18 games for the year, picked up a couple of bags of 4 goals against Hawthorn and Melbourne, and finished in the top 5 in the club champion award.

In the opening round of 1989 at the WACA, Scott booted a career-high 7 goals against the Bombers. He played 15 games for the year, leading the ruck division and finishing in the top 10 in the B&F for the second straight year.

In 1990 he played every game for the regular season but missed the drawn final against Collingwood and the replay the following week, although he was recalled for the semi-final against Melbourne and the preliminary final loss to Essendon. They would be his last games as an Eagle – the development of Dean Irving and the arrival of David Hynes and then Paul Harding meant that Scott spent the next two years in the WAFL.

Despite that, he did have a small hand in the 1992 premiership win. He and another foundation squad member on the outer, Adrian Barich, famously penned a moving letter to the grand final team outlining how much a win would mean to the club.

Retrieved from "https://eaglepedia.fandom.com/wiki/Phil_Scott?oldid=22851"
Community content is available under CC-BY-SA unless otherwise noted.