West Coast Eagles Wiki
Register
Don't have an account?
Sign In
Advertisement
in: Past players, Players, Players from East Fremantle 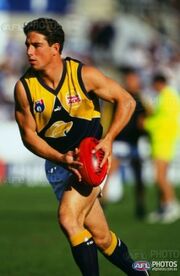 The feisty Read was capable of playing in defence or the midfield. He was a fixture in the side in his first few seasons before consecutive knee reconstructions stalled his career.

Read burst onto the scene in 1998, playing 21 games in his rookie year including the qualifying final against the Bulldogs and taking home the club’s Rookie of the Year award.

Read was a regular in the senior side in his first three seasons, playing 63 of a possible 69 games. His 63rd game was undoubtedly his most spectacular, the diminutive Read engaging in several toe-to-toe stoushes with Dale Kickett during the infamous Demolition Derby.

That was Read’s last AFL match for a while – not because of suspension (though he did cop two matches following the derby) but rather back to back knee injuries. Read sat out 2001 due to a reconstruction following a pre-season ACL, then blew out the other knee the following pre-season and missed another year.

On his return, Read was given the number 24 that had been vacant since the retirement of another enforcer, John Worsfold. Unfortunately but unsurprisingly, Read failed to match his pre-injury form. Although he managed 11 games for the year, including the final six rounds and the elimination final against the Crows, he was delisted at the end of the season.

Thrown a lifeline by Melbourne in the pre-season draft, Read played 34 games in three seasons for the Dees.

After being delisted at the end of 2006, Read had a stint with Geelong in the VFL before returning west to play for Subiaco in the WAFL, where he participated in their 2008 flag.