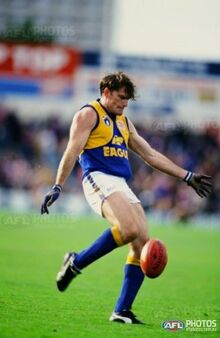 Playing off a half-forward flank and in the midfield, Wilson added a rugged edge to the silky smooth skills of Matera, Kemp and co.

Originally from East Fremantle where he won All-Australian selection in 1986, Wilson was recruited by Richmond as the Eagles were forming and spent three years at Punt Road before being enticed home. He made his debut for the Tigers in West Coast’s first ever game, and ended up playing 54 games in the yellow and black before being traded home.

Wilson played 19 games in his first year in blue and gold and followed it up with 22 games the following year, including the grand final at Waverley Park.

Willow had a belated start to the 1992 season due to injury, but burst out of the blocks in his first game back in round 10 against Adelaide with 26 touches and 4 goals. Holding his spot for the rest of the season, Wilson took his spot in the grand final against Geelong and, although he had a relatively quiet game, kicked two important goals to help West Coast to their first premiership.

The tenacious Wilson had a strong 1993 season, playing 22 games and twice topping 30 disposals as he spent more time in the midfield, but had a quiet match as West Coast were knocked out of the finals by Essendon in a semi. He was recognised for his output during the year by being named equal runner-up in the Club Champion award with Peter Matera, the pair finishing 3 votes behind joint winners Glen Jakovich and Don Pyke.

The following season he missed just one game, providing an integral link in the team’s run to its second premiership success in three years and again kicking 2 goals in the grand final.

Willow struggled with injury and form in 1995, playing just 16 games and spending some rare time at East Fremantle. At the end of the year, with his 32nd birthday approaching, Wilson called it a day. He retired with 171 VFL/AFL games, 123 goals and two premiership medals to his name.

In retirement Wilson generally pursued business interests outside football, although he did have a stint as head coach of Swan Districts and for a time provided special comments for Channel 10.

Retrieved from "https://eaglepedia.fandom.com/wiki/Peter_Wilson?oldid=28580"
Community content is available under CC-BY-SA unless otherwise noted.