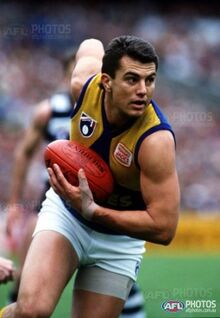 West Coast’s all-time leading goal scorer, Peter Sumich was the spearhead of the 1992 and 1994 premiership sides.

Peter Sumich came from a family of market gardeners and was a talented junior cricketer as well as a footballer. Recruited to the Eagles with a pre-draft selection in 1988 after leading the South Fremantle goalscoring that season, Sumich was rated highly enough to be given the number 4 jumper of retiring foundation captain Ross Glendinning. He immediately proved deserving of the honour, establishing himself as the spearhead of the team in his first season.

In just his ninth senior game, Suma set a new club record with 8 goals against Footscray at the WACA, and picked up a few bags of 5 en route to a season tally of 45 and the first of his 7 club goalkicking awards for his career.

He doubled that tally in his second season, equalling his own record with another bag of 8 against the Swans and kicking half-a-dozen in another 5 games. His biggest moment in 1990, however, may have come in the qualifying final against Collingwood at Waverley when he had a shot at goal after the siren to win the match. Buried deep in the wrong pocket for a left-footer, Suma’s shot hit the post to level the scores and the teams were forced to come back the following week.

Suma went to another level in 1991 as West Coast dominated the regular season with a 19-3 record. The laconic full-forward kicked 111 goals for the season, becoming the first left-footer to crack the ton (although he still finished behind Tony Lockett in the Coleman Medal) and setting a club season record that may not be beaten for some time. He equalled his previous best haul with another 8 goals against Geelong but could’ve smashed it – the maddeningly unreliable set shot also kicked 7 behinds that day. Two months later he set a new club record of 13 in another massive night out against the Bulldogs at the WACA. Suma was also one of the few Eagles that could hold their head high after the 1991 grand final loss, kicking 5 goals straight from limited opportunities.

Although he had a slightly quieter 1992, Suma still managed to kick 82 goals for the year. Once again poor kicking cost him a potential record as he kicked 11.8 in a demolition of the Bombers. He saved his best results for the finals, kicking 8 against Geelong in the semi-final (still a club finals record) and then another 6 against the Cats as the Eagles won the flag for the first time.

Suma looked set for a massive season in 1993, kicking 7 goals (and 8 behinds!) in the season-opener against Essendon and racing to 26 goals from his first 5 games. He tailed off a bit after that, although he still managed 76 goals for the year. 1994 marked the beginning of a slow decline for Sumich – although he led the club’s goalkicking for the sixth straight year, his 49 goals were his lowest tally since his debut season. He still received a second premiership medal of course.

Sumich struggled from that point on, spending extended periods at South Fremantle and failing to reach the lofty heights of the early 1990s. He played just 5 AFL games in 1995 and another 7 in 1996, taking until the halfway point of that latter season to force his way into the side. Despite that, he showed he could still mix it with the best forwards in the country, kicking dual bags of 6 goals either side of a 2-week suspension.

He fared a little better in 1997, managing 13 games and winning the club goalkicking for a seventh time, albeit with just 33 goals. When West Coast bowed out of the finals after a loss to Adelaide Sumich, nearing his 30th birthday, called time on his AFL career.

Although his 13 goal haul was later beaten by Scotty Cummings, Sumich continues to hold a number of club records – most career goals (514), highest season tally (111), most bags of 8 or more goals (7) – and is an automatic selection at full-forward whenever an all-time Eagles team is named.

Sumich played on for one more season with South Fremantle and later became the Bulldogs’ senior coach, before serving as a trusted assistant coach under his former captain John Worsfold at West Coast for a decade.

Retrieved from "https://eaglepedia.fandom.com/wiki/Peter_Sumich?oldid=28644"
Community content is available under CC-BY-SA unless otherwise noted.