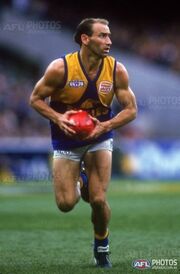 One of the most celebrated West Coast players of all time, Matera arrived at the club from South Fremantle (via Wagin) after being drafted early in the 1989 national draft. He narrowly missed out on having the opportunity to play with older brother Wally, who had left West Coast for Fitzroy a year earlier after playing 24 games for the club. Younger brother Phil would later join Peter at the Eagles in 1995.

After playing just 5 games in his first year on the list (in the unfamiliar number 37 jumper), “Roo” had the breakout year to end all breakout years in 1991. The exciting wingman played every game including the Grand Final loss to Hawthorn, kicked 32 goals and averaged more than 20 possessions per game. He finished fourth in the Brownlow Medal and was named on a wing in the All-Australian team at the end of the year. He also came third in the Club Champion award, just two votes behind winner Craig Turley.

His 1992 was just as good. Although he missed selection in the All-Australian team, Matera put in a phenomenal finals effort, racking up 35 touches and two goals against Geelong in the semi final and following it up with an epic 5-goal haul against the Cats in the grand final a fortnight later for which he was awarded the Norm Smith Medal.

Matera returned to the All-Australian team in 1993, again on a wing, as he kicked 23 goals and averaged 22 touches a game from his 20 games. He kicked 3 goals as the Eagles eliminated North Melbourne in the first round of the finals but was held relatively quiet by Essendon as they ended West Coast’s premiership defence the following week. Matera finished equal runner up (with Peter Wilson) in the club champion award, behind joint winners Glen Jakovich and Don Pyke.

The lithe Matera remained at the top of his game throughout most of the mid-1990s. In 1994 he had an astonishing run in the Brownlow Medal, polling best on ground in 8 games (including four in a row in May and June) and finishing with 28 votes, 2 behind the winner (Carlton’s Greg Williams) with the highest runner-up tally in Brownlow history. Matera was named on a wing in the All-Australian team for the third time, and won his second premiership medal as the Eagles demolished Geelong despite a quiet game from the former Norm Smith Medallist, who was battling a leg injury.

Reinvention as a halfback[edit | edit source]

After a relatively down 1995 season when he battled niggling injury and constant tagging, Matera was reinvented as a running halfback in 1996. The move paid immediate dividends, with Roo playing every game and making the All-Australian team for the fourth time, this time named on a half-back flank. He followed that up with an even better 1997 – again being named in the All-Australian half-back line, finishing equal second in the Brownlow behind winner Robert Harvey (forgetting Chris Grant, who finished a vote ahead of Harvey but was ineligible), and winning his first and only Club Champion award after nearly a decade of strong finishes.

That crowning achievement almost marked the end of Matera’s career in the blue and gold. During the 1997/98 offseason he announced his intention to move to Victoria to play for Melbourne and it took a concerted effort from his teammates to eventually persuade him to stay on. Possibly as a result of that turmoil, his 1998 season did not reach the glorious heights of previous years. There was still, however, some highlights such as a career-high 7 goal haul against Essendon at the MCG where the Eagles came from behind to snatch the points.

With the departure of captain John Worsfold, Matera was named as vice-captain under Guy McKenna for the 1999 season. He had started to slow down by then, however, and his trademark bouncing runs down the wing became less common. Injury was becoming more of a problem too – he played just 14 regular season games that year, the least since his rookie year, and was injured again in the “home” semi-final loss to Carlton at the MCG, his 200th game.

Although he burst out of the blocks in 2000 with 30 touches and 3 goals against the Roos in the opening round, his struggles continued throughout the Eagles’ dark years of 2000 and 2001. Matera’s form improved somewhat in 2002 under the coaching of former skipper Worsfold and he intended to play on in 2003 to help fellow premiership stars Jakovich, McIntosh and Banfield hand on the mantle to the new brigade of Eagles. Unfortunately, a chronic knee injury got the better of him and Roo announced his retirement just prior to the start of the 2003 season.

The middle Matera brother will be remembered as an electrifying line-breaking wingman and arguably the best Eagle of all time. In retirement he has been honoured with entry into the AFL Hall of Fame (the first West Coast player to achieve that accolade), being an inaugural inductee into the West Coast Hall of Fame, selection in both the Indigenous and Italian Teams of the Century (his father is Italian, his mother is Aboriginal) and a virtually automatic selection on the wing in West Coast’s Team 20 in 2006. Those honours are added to his achievements during his playing days, which include 2 premierships, a Norm Smith Medal, 5 All-Australian selections, 2 runner-up finishes in the Brownlow Medal and, surprisingly, only one Club Champion Award. Matera currently sits 4th on the list of all-time games played and 7th on the list of goals scored for West Coast.

In retirement Matera has taken on roles at both East Perth and Swan Districts, as well as coaching in the South-West. He also is a regular participant in the AFL’s Legends game as well as the annual Chris Mainwaring tribute match.

Retrieved from "https://eaglepedia.fandom.com/wiki/Peter_Matera?oldid=33351"
Community content is available under CC-BY-SA unless otherwise noted.