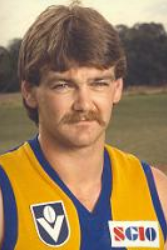 Ruckman Peter Higgins played under-19s and reserves football for Carlton before crossing west to play for Claremont in the WAFL.

Higgins played in the Tigers’ 1987 premiership and was drafted by West Coast in the 1988 draft.

Higgins had a strong debut with 28 hitouts against Collingwood but played just three more games in 1989 and none at all in 1990. He was delisted at the end of that season, but picked up again in the 1991 pre-season draft. After spending the year at East Fremantle and again failing to gain senior selection, he was cut for good at the end of the 1991 season.

Higgins played a further season for Claremont in 1993.

Retrieved from "https://eaglepedia.fandom.com/wiki/Peter_Higgins?oldid=22500"
Community content is available under CC-BY-SA unless otherwise noted.