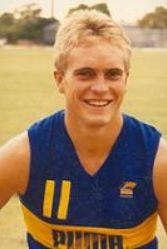 A classy wingman, Peter Davidson won Claremont’s best and fairest in 1985 before being recruited to be a part of the inaugural Eagles squad.

Davidson played in the first game against Richmond, but took little part after being injured early. He managed just one more game for the Eagles, the round 3 loss to Sydney, a frustrating series of soft-tissue injuries preventing him from having more of an impact.

At the end of the season he announced his retirement from VFL footy due to his run of injuries.

Brisbane decided to take a punt on him a couple of years later, picking him up in the 1989 national draft. He spent the 1990 season in Brisbane, managing 7 games for the Bears before returning to WA.

Davidson then joined East Fremantle, where he played in their 1992 WAFL flag.

Retrieved from "https://eaglepedia.fandom.com/wiki/Peter_Davidson?oldid=23253"
Community content is available under CC-BY-SA unless otherwise noted.