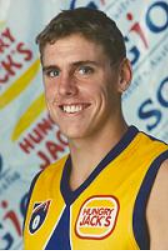 Drafted as a project player late in the 1995 draft, Whitelaw failed to make West Perth's senior side in his two seasons at West Cost and was delisted.

After being delisted Whitelaw played 15 senior games for West Perth, before crossing to Claremont where he played another 10 games.

Retrieved from "https://eaglepedia.fandom.com/wiki/Paul_Whitelaw?oldid=28673"
Community content is available under CC-BY-SA unless otherwise noted.