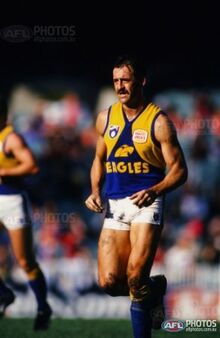 Originally from East Fremantle, Paul Harding was a useful but undersized ruckman who narrowly missed out on being part of the inaugural West Coast squad when Hawthorn went to the Victorian Supreme Court to enforce their previous agreement.

After being told by the courts that his Hawks contract meant he could not play for the Eagles or his original club East Freo, Harding agreed to move to Hawthorn, but played only 11 games in two seasons. He was then traded to St Kilda as part of the first ever trade for draft picks, playing 62 games in three years before eventually returning to Western Australia.

His timing couldn’t be better. Harding arrived just in time to lead the ruck through the 1992 season, culminating in the team’s inaugural premiership.

His good form continued throughout 1993 when he played in 21 games. Unfortunately, he managed just six matches in 1994 and took no part in the side’s second successful finals series, although he did play in East Fremantle's flag that year. He remained on West Coast's list for 1995 but did not play a game.

Harding played one further season with the Sharks before retiring in 1996.

Retrieved from "https://eaglepedia.fandom.com/wiki/Paul_Harding?oldid=28593"
Community content is available under CC-BY-SA unless otherwise noted.