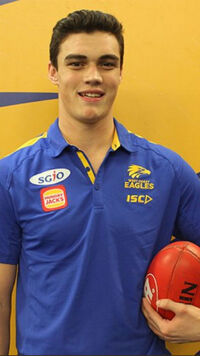 Victorian basketballer Patrick Bines joined the club ahead of the 2019 season as a Category B rookie alongside Brodie Riach.

After playing junior football with East Brighton, Bines opted to pursue basketball, representing Australia at the world Under-17s championship in 2016 as well as playing for Vic Metro alongside Jack Petruccelle. Bines spent 2018 playing SEABL for the Melbourne Tigers, but was courted by a number of AFL clubs to switch codes and eventually signed with West Coast in August 2018.[1]

Developed as a ruck/forward, Bines played just one WAFL game before needing surgery on a hernia. He returned later in the year but was used sparingly, only adding three more games as the standalone reserves side pressed for a finals berth.

Retrieved from "https://eaglepedia.fandom.com/wiki/Patrick_Bines?oldid=31185"
Community content is available under CC-BY-SA unless otherwise noted.