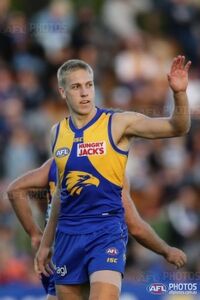 A mobile mid-sized forward in the mold of fellow West Perth junior Jack Darling, Allen leapt into first-round calculation after a superb Under-18 campaign in which he won the Larke Medal and All-Australian selection. West Coast, the side he supported growing up, pounced when he was overlooked in the top 20 selections.[1]

After a delayed start to 2018 due to a leg injury, Allen was trialled in the backline with East Perth. He showed strong form with the Royals and was given a midseason debut against the Giants, partnering Will Schofield in defence, but despite a positive outing made way the following week when a host of stars returned. Allen shifted to attack with the Royals and again impressed, making a second AFL appearance in the final game of the regular season as a forward. He was again squeezed out when Josh Kennedy returned for the finals, and was an emergency throughout the victorious finals campaign.

Following a strong pre-season and with a number of the premiership forwards unavailable, Allen was given an opportunity early in the 2019 season and performed well, playing 21 games for the season in a number of roles including backup ruck. He received a Rising Star nomination late in the year, but missed the first final due to knee soreness and could not force his way back into the side. Allen continued his strong form in 2020, playing 15 of a possible 18 games. Used primarily as a pinch-hitting backup to All-Australian ruckman Nic Naitanui, Allen also showed a knack for scoring a vital goal, kicking two second-half goals in the Eagles' elimination final, both of which swung the lead to the home side in a tight tussle.

Retrieved from "https://eaglepedia.fandom.com/wiki/Oscar_Allen?oldid=34130"
Community content is available under CC-BY-SA unless otherwise noted.