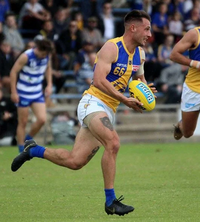 Amateur product Nick Reid joined West Coast's standalone reserves side after a successful run with North Beach, and after a strong season was added to the rookie list.

Reid played colts for Claremont in 2014 before returning to his junior club, North Beach, where he spent the next four years. He finished runner-up in the WAAFL's best and fairest in 2018, behind fellow top-up Joel Ashman, before signing with the new standalone Eagles side ahead of the 2019 season.[1]

In his first season of senior WAFL football, Reid was a regular member of the Eagles' forward line and impressed with his goalkicking ability and forward pressure, finishing as the club's second-leading scorer with 23 goals from 15 games. With premiership forwards Willie Rioli (suspension) and Daniel Venables (concussion) set to miss the 2020 season, Reid was offered the opportunity to train with the AFL squad over the summer, and eventually added to the rookie list in the supplementary signing period along with former Geelong player Jamaine Jones.

Reid was called up for a senior debut against Hawthorn during the 2020 season, becoming the club's oldest AFL debutant since Troy Wilson. He played three games but had little impact, and was delisted at the end of the season.

Retrieved from "https://eaglepedia.fandom.com/wiki/Nic_Reid?oldid=34361"
Community content is available under CC-BY-SA unless otherwise noted.