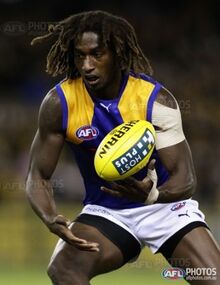 Excitement machine Nic Naitanui has already won a number of accolades while barely scratching the surface of his massive potential.

A highly-rated junior, Naitanui was named as All-Australian ruckman in both the 2007 and 2008 underage championships. He was widely considered a likely no.1 pick in the 2008 draft pool but Melbourne instead opted for Victorian Jack Watts, allowing the Eagles to swoop on the Midvale product at pick 2.

Given the famous number 9 jumper vacated by Ben Cousins 12 months earlier, Naitanui had an injury-delayed start to his rookie season but after strong form at Swan Districts he was called up for his senior debut against Richmond. The following week he showed a glimpse of his talent with three final-quarter goals to seal a win over Hawthorn. The flying Fijian played 10 of the final 11 games in 2009, sharing ruck duties with Mark Seaby and Quinten Lynch as a groin injury ruled out champion Dean Cox for the season.

With Seaby departing for Sydney in 2010, Naitanui formed a potent ruck combination with Cox. The pair played every game and Naitanui finished fifth in the Club Champion award, one spot behind his senior teammate. He was also rewarded with the club's Rookie of the Year award, and received a Rising Star nomination for a dominant early-season game against Essendon.

Another strong season followed in 2011. The aerial specialist played 23 games and his ruck combination with Cox was a big factor in the club's surprising run deep into the finals. Naitanui was also having an effect on games away from the ruck contest, impressing with his phenomenal tackling and ground ability for a man of 201cm and unlucky not to win Mark of the Year for a towering pack mark over Carlton's Andrew Walker.

NicNat took his game to another level in 2012, earning All-Australian honours and relegating Cox to the AA forward pocket. He consistently gave his midfielders first look at the ball with deft taps to advantage, and often won the clearance himself. His performances included a 25 possession, 31 hitout, 7 tackle performance against Carlton and a 3 goal, 36 hitout outing against Brisbane that included more jaw-dropping highlights than most players manage in a career.

After the highs of 2012, he had a nightmare start to 2013 with groin surgery late in the pre-season keeping him out of action until round 6. After coming on as the sub and playing less than a half against the Bulldogs, he soon hit his stride with a memorable pack mark and after-the-siren goal to win the Round 8 match against North, the first time an Eagle has ever done that. Unfortunately, the groin injury flared up and Naitanui's output deteriorated quickly. After a few ineffectual games in a row, he was rested indefinitely and then packed up for the year when finals were no longer mathematically possible.

The big ruckman continued to struggle with his body throughout 2014. While he played out the year, he often seemed not quite right, although he still showed how much he could influence a contest in a handful of eye-catching games, particularly in his 100th appearance against the Gold Coast when he had 22 possessions and 34 hitouts. He also signed a five-year deal during the season, tying him to the club until 2019.

In 2015 Naitanui finally showed what he could do with a full fitness base, dominating the ruck all year. He was named in the extended All-Australian squad but left out of the final side when selectors controversially opted not to pick a second ruckman. In a season of highs and lows, Naitanui took Mark of the Year against Geelong but missed two games late in the year after his mother tragically passed away in Fiji.

2016 was an eventful but ultimately tragic year. Naitanui missed a chunk of games mid-season after surgery on an Achilles issue, returning to kick the game-winning goal in the dying moments against the Giants in his second match back before wrecking his knee the following week against Hawthorn. His season ended on the cusp of finals, with the big ruckman needing a knee reconstruction. He spent 2017 rehabbing, and although he was reportedly close to a return during the finals series the club elected not to take the risk.

Finally making his long-awaited return in the opening round of 2018, Naitanui looked to have lost little of his athleticism. He was one of the form ruckmen of the league, and missed only one game through suspension before heartbreakingly injuring his other knee against Collingwood at the MCG, requiring another reconstruction. He made a second return from a lengthy layoff midway through 2019, but lasted just three games before succumbing to a syndesmosis ankle injury that kept him out for more than a month. Naitanui made it back for the finals but could not lift West Coast past the semi-finals.

Starting 2020 fully-fit for the first time in years and benefiting from the reduction in game length, Naitanui returned to career-best form, cementing his position as the most influential ruckman in the game and earning a John Worsfold Medal as well as a second All-Australian berth.

Retrieved from "https://eaglepedia.fandom.com/wiki/Nic_Naitanui?oldid=35293"
Community content is available under CC-BY-SA unless otherwise noted.