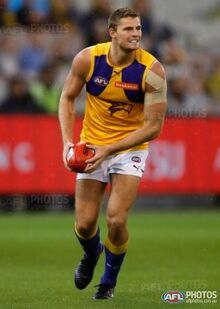 Mobile forward-ruckman Nathan Vardy was recruited to boost the club's ruck stocks after an injury-plagued stint with Geelong.

Hailing from the tiny Gippsland town of Yarram, Vardy managed just 25 games in seven seasons with the Cats after being drafted in 2009. He battled numerous injuries during his time in Geelong, including a hip injury that kept him out for much of the 2012 season and a knee reconstruction that wrote off his entire 2014 campaign. He played just four senior games in his last two years.

With Nic Naitanui set to miss the entire 2017 season, West Coast cast a wide net to cover the ruck division, with the former Cat eventually agreeing to shift West. With Naitanui and his understudy Scott Lycett ultimately managing just one game between them, Vardy and his suspect body stood up superbly in the unfamiliar role of leading ruckman, with the big Victorian playing almost every game.

Expected to battle with Lycett for the role of back-up to Naitanui in 2018, Vardy suffered a groin injury during the pre-season that wrecked the first half of his year. He returned through East Perth, finding form just in time to replace Naitanui who had suffered another ruptured ACL, and played 10 of the last 11 games including the victorious Grand Final.

With Lycett at Port Adelaide and Naitanui still unavailable, Vardy started the 2019 season in partnership with newcomer Tom Hickey in the senior side, although he struggled to find his previous form and was dropped to the WAFL, where he spent most of the rest of the year.

Retrieved from "https://eaglepedia.fandom.com/wiki/Nathan_Vardy?oldid=31342"
Community content is available under CC-BY-SA unless otherwise noted.