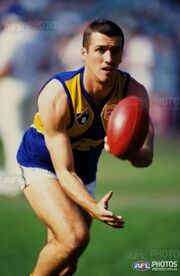 A mobile and versatile tall, Mitchell White played in the 1992 flag as a teenager but missed out on the 1994 grand final.

Mitchell White arrived at the club as a pre-draft zone selection in 1990 along with Glen Jakovich.

White took a little longer than Jako to make his mark at the club, playing just 2 games in his debut season, but played 22 games in 1992 including the Grand Final victory over Geelong.

After continuing on with his good form in 1993, his 1994 season was wrecked by a groin injury. He returned late in the season, but was unable to consolidate his place in the side and after playing in the preliminary final, he missed out on a spot in the grand final as Ashley McIntosh returned. Coach Mick Malthouse later said that leaving White out of the side was one of his biggest regrets.

Playing mostly in defence early in his career, White played permanently forward in 1996 and the move paid massive dividends. He finished the season leading the club’s goalscoring with 37 majors and was named on a forward flank in the All-Australian side.

White again suffered from the injury curse in 1997 as a knee reconstruction curtailed his season. He was probably not quite the same player after that, although he had a reasonable 1999 as he played every game and kicked 29 goals.

After a disappointing 2000 season he became a victim of the Ken Judge cleanout and was traded to Geelong after 151 games.

White played 23 games for Geelong in three seasons before retiring and returning to Perth.

Retrieved from "https://eaglepedia.fandom.com/wiki/Mitchell_White?oldid=32969"
Community content is available under CC-BY-SA unless otherwise noted.