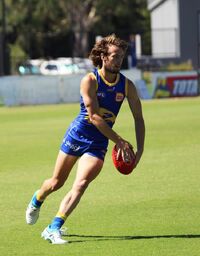 The North Hobart junior was an All-Australian in both 2018 and 2019, but was overlooked in the national draft after injuring his knee late in the 2019 season, allowing West Coast to pounce on him in the rookie draft. On being drafted he was described as a prolific ball-winner with elite agility and a long kick.[1]

Already facing a large obstacle with the absence of any reserves football during the pandemic-affected 2020 season, O'Neill was unable to take the field for the entirety of the season due to a back injury, returning home to Tasmania during the early-season shutdown and only rejoining his teammates after they returned from their first stint in a Queensland hub. At the end of the season, he was delisted.

Retrieved from "https://eaglepedia.fandom.com/wiki/Mitch_O%27Neill?oldid=34530"
Community content is available under CC-BY-SA unless otherwise noted.