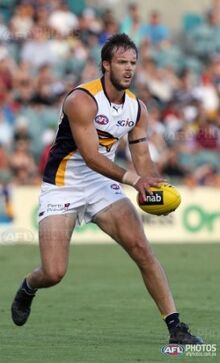 The Ballarat product was taken by the reigning premiers with their first pick (16) in the 2006 draft, six picks after twin brother Nathan was selected by Collingwood. He made a surprise debut in the opening round rematch against the Swans when Dean Cox was a late withdrawal, and acquitted himself well as a lead-up centre-half-forward. Brown played five games in his rookie season, spending most of the year with East Fremantle.

Disaster struck in the 2008 pre-season when he injured his ACL in a match in Albany, causing him to miss the entire year. He bounced back in 2009 to play 19 games, switching between the forward line and defence, and earned a Rising Star nomination for a 22-possession game against the Bulldogs late in the year.

2010 was generally a poor year for Brown. He started the season as a key forward but was dropped after kicking just four goals in the first five games. Returning later in the season, he was used mainly in defence to better effect, tallying 13 games for the season before missing the last few rounds with a groin injury.

Brown played the first four games of 2011 before breaking a thumb against the Hawks in Launceston, which caused him to miss much of the season. When he returned to action he found himself stuck behind Glass, MacKenzie and Schofield in the battle for spots down back, and spent much of what remained of the year at the Sharks, only managing two more senior games as an injury replacement. 2012 was much of the same, with Brown left to ply his trade in the WAFL and wait for injury or suspension to create an opportunity. After only playing eight senior games for the year, and despite receiving the Best Clubman award at the end of the season, Brown requested a trade to St Kilda for more opportunities.

That trade didn't eventuate, with Brown contracted for 2013 and declared to be a "required player" by the Eagles, who were unhappy with the trades proposed by the Saints. Instead Brown forced his way into the senior side and remained there for much of the 2013 season, playing 19 games and cementing himself as the side's number two key defender, with MacKenzie generally taking the opposition's best key forward and veteran Glass switching to more of a floating role. He added a new string to his bow in 2014, the 196cm defender regularly taking on (and beating) the opposition's best small forward.

When MacKenzie went down with a year-ending knee injury in the 2015 pre-season Brown was expected to fill his role, but sadly ended up joining him in the rehab group after also doing his ACL (the same knee he'd injured in 2008) in the opening quarter of round 1.

On the comeback trail in 2016, Brown suffered a finger injury in the NAB Challenge and missed the first half of the year as a result. Returning well down the pecking order in the backline with the development of Tom Barrass, Brown made a handful of senior appearances in the unfamiliar role of backup ruck but with at best mixed results.

At the end of the year, he announced that he would seek a return to Victoria as a free agent as his wife, a professional netballer, had signed with a Melbourne-based team. After failing to obtain an offer from a rival club during the free agency period, he was delisted by West Coast in order to facilitate his move.

After going undrafted, Brown signed with amateur side St Kevin's Old Boys for the 2017 season.[1] He later revealed that he had received a contract offer from West Coast and had intended to accept it, but the club withdrew it suddenly in order to make room for Sam Mitchell. [2]

Retrieved from "https://eaglepedia.fandom.com/wiki/Mitch_Brown?oldid=25770"
Community content is available under CC-BY-SA unless otherwise noted.