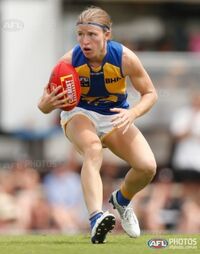 A diehard Eagles supporter, Bowen was selected in the 2018 All-Australian under-18 side and the AFL Women's Academy following a strong performance for WA. Having trained with West Coast's academy for some time, she was announced as an inaugural signing in January 2019. On being signed, Bowen was described as a contested ball beast.[1]

Retrieved from "https://eaglepedia.fandom.com/wiki/Mikayla_Bowen?oldid=32381"
Community content is available under CC-BY-SA unless otherwise noted.