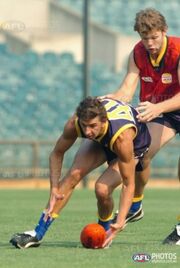 A project ruckman, Embley continually struggled with injury. In his entire time at West Coast he was only able to manage two games for Swan Districts' seniors.

Given a third year on the rookie list, he was unable to get his body right and was finally cut loose at the end of 2006.

Embley played one further season at Swans, managing to add just a handful more senior games, before lining up for Bunbury in the South West Football League.

Retrieved from "https://eaglepedia.fandom.com/wiki/Michael_Embley?oldid=24397"
Community content is available under CC-BY-SA unless otherwise noted.