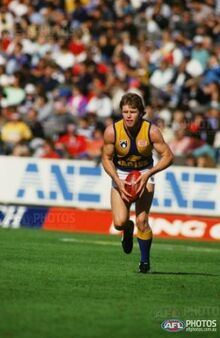 A dour and reliable defender from East Fremantle, Monkey Brennan was a mainstay at fullback during the Eagles’ formative years alongside John Worsfold and Guy McKenna.

An inaugural squad member, Brennan served as Worsfold’s vice captain during the early 1990s. He was there for all of West Coast’s big moments: the inaugural win over Richmond, the lost Grand Final in 1991, the breakthrough premiership victory in 1992 and the follow-up in 1994.

Brennan retired following the 1995 season. At the time, his 179 games was a club record. He was honoured by being selected at full-back in the West Coast Team of the Decade in 1996 and in a back pocket alongside premiership teammate Ashley McIntosh in Team 20 in 2006.

Brennan works as a mortgage broker. In 2011 he was named as the club's number 1 ticket-holder. At the same time his son Jacob joined the playing squad as the first “true” father-son selection in West Coast history (though others such as McIntosh and Ben Cousins were selected based on their father’s WAFL careers).

Retrieved from "https://eaglepedia.fandom.com/wiki/Michael_Brennan?oldid=28584"
Community content is available under CC-BY-SA unless otherwise noted.