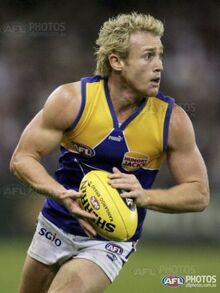 Hailing from Echuca, on the banks of the Murray River, Michael Braun was a hard-running midfielder who was an unsung but important cog in the high-flying Eagles’ midfield of the early 2000s.

Braun was drafted from the Bendigo Pioneers and made his debut halfway through the 1997 season after solid form for Subiaco. He played 7 games for the season, getting a Rising Star nomination for his 20-possession, 1-goal effort against Adelaide. Braun got a rare second nomination in the opening round of 1998, and played 20 games for the year, finishing 7th in the Club Champion award (although he was pipped for the club’s Rookie of the Year award by Phil Read).

A tremendous endurance runner, Braun played every game in 1999, just losing out to captain Guy McKenna in the Club Champion award on a countback. A knee injury midway through 2000 set him back, as did another knee injury midway through the following season. It wasn’t until 2003 that he fully recovered his form, playing 22 of a possible 23 games and finishing top 10 in the best and fairest for the first time since his runner-up finish four years previously.

With the midfield of that time including a young Chris Judd alongside fellow stars Ben Cousins and Daniel Kerr, Braun was able to take on a supporting role which he did with aplomb. Braun played every game in 2004 and finished fourth in the Club Champion award. In 2005 his knee problems returned at the worst possible time – the early stages of the preliminary final against Adelaide. The injury meant that the loyal clubman missed the grand final, with his enforced absence (along with that of Phil Matera and Rowan Jones, among others) keenly felt as the Eagles went down in a nail-biter.

That sad tale had a happy ending the following year, with Braun again playing almost every game and taking his place on the wing in the Eagles’ first premiership in 12 years.

Braun’s 2007 got off to an inauspicious start when he urged his teammates to “have a f…ing good year” in his acceptance speech after winning the Glendinning Medal in the first derby of the season. In the midst of the Ben Cousins saga and general accusations of culture issues at the club, the AFL came down hard on Braun, fining him $5,000. He nevertheless had a solid season and in particular a strong finals series, averaging 26.5 touches and 6 tackles as West Coast bowed out in straight sets.

While he had a reasonable season in 2008, Braun’s output was down on his usual levels and he struggled with injury. Braun announced his retirement during the season but played out the year, turning back the clock with a big effort in the late-season win over Essendon. He finished his career with 228 games (the most by a West Coast Eagle from Victoria) and a premiership medal.

In retirement, Braun took on the role of colts coach at East Perth.

Retrieved from "https://eaglepedia.fandom.com/wiki/Michael_Braun?oldid=33332"
Community content is available under CC-BY-SA unless otherwise noted.