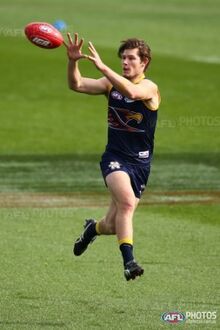 Hailing from Mount Gambier, the left-footed Allen was a promising junior cricketer before stress fractures in his back prevented him from bowling and he began to focus on football.[1]

On being drafted, he was described as having a safe pair of hands and the ability to regularly win one-on-one contests. The key forward spent his rookie season pressing for senior WAFL selection, playing 10 senior games before returning to East Perth's reserves side for their finals campaign that ended with a Grand Final loss. The club gave him a show of faith during the year, adding a third year to his initial contract.

Unfortunately for Allen, his second year was a virtual write-off after he missed the first month with a hamstring injury, then managed just two senior WAFL games before succumbing to a stress fracture in the foot. Promisingly however, those two games both yielded a three-goal haul for the young South Australian.

Given a clear run in 2018, Allen showed strong early form up forward for the Royals and was selected as an emergency on a couple of occasions. He added another string to his bow in the second half of the season, showing he could also play as a big-bodied midfielder, and was a joint winner of East Perth's best and fairest (with Luke Partington and Patrick McGinnity), but was still unable to force his way into the AFL side.

His long wait continued throughout 2019, despite Allen showing good form as a midfielder and being taken interstate as a travelling emergency on several occasions. At the end of the year, having been unable to break into the side, he was delisted.

Retrieved from "https://eaglepedia.fandom.com/wiki/Matthew_Allen?oldid=31655"
Community content is available under CC-BY-SA unless otherwise noted.