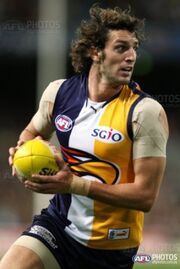 Athletic key defender Matt Spangher spent six years at the club for just 26 games, before going on to play for Sydney and Hawthorn.

Allocated to East Fremantle after being drafted west, the promising backman's rookie season was a write-off due to osteitis pubis. He made his league debut with the Sharks in 2007, managing a handful of games that season while being hampered by groin and shoulder injuries.

The long-haired Spangher finally made his AFL debut early in 2008. Dropped after a couple of losses, he returned late in the season for another four games. Spangher played the first game of 2009 before being dropped, which summed up his season - the growing cult figure playing 11 senior games interspersed among stints with East Fremantle.

He played another eight games in 2010 but was passed by fellow young defenders Eric MacKenzie, Will Schofield and Mitch Brown. At the end of the season he was delisted.

After training with Hawthorn, Spangher was picked up by Sydney in the 2010 national draft. After experimenting with a forward role in the reserves he played six games with the Swans in 2011, including their two finals, but couldn't manage a game in 2012 as Sydney won the flag.

He was traded to Hawthorn ahead of the 2013 season, and played four games for the Hawks including the qualifying final. Spangher won a VFL premiership with Box Hill and was in the mix for selection in the AFL grand final the following week but was named as an emergency. As a result Spangher held the distinction of being on the playing list of three premiership clubs (West Coast in 2006, Sydney in 2012 and Hawthorn in 2013) without winning a medal. That was rectified the following year as the cult figure played in Hawthorn's victorious 2014 grand final.

Due to injury, Spangher could manage just five more games over the next two years before announcing his retirement at the end of 2016. He finished on 24 games in brown and gold and 56 AFL games overall.

Spangher signed with country team Shepparton Utd for the 2017 season.[1] He then spent some time in London before joining Collingwood as AFL Engagement Manager ahead of the 2020 season.[2]

Retrieved from "https://eaglepedia.fandom.com/wiki/Matt_Spangher?oldid=34706"
Community content is available under CC-BY-SA unless otherwise noted.