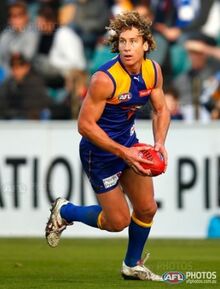 Ball magnet Matt Priddis became a clearance and tackling machine after joining the club as a relatively mature-aged recruit.

Overlooked in the draft several times, Priddis played in a premiership with Subiaco in 2004 and won the Lions' best and fairest in 2005 before finally getting his chance at AFL level when he was picked up by West Coast in the 2006 rookie draft at the age of 20.

Priddis made his debut in the famous comeback match against Geelong, and played one further game in the 2006 season. While he missed out on premiership glory at AFL level, he won a second flag with Subiaco as well as the Sandover Medal (with a then-record number of votes).

Upgraded permanently to the senior list ahead of the 2007 season, Priddis stepped up into the midfield. In the absence of Ben Cousins in the first half of the year and Chris Judd in the second, Priddis played every game for the season and came fourth in the Club Champion award, the first of many high finishes.

With Cousins and Judd both departing at the end of 2007, Priddis became an integral member of the midfield quickly. He led the club in clearances and tackles every year between 2008 and 2010 and finished in the top six in the best and fairest in each year, including a runner-up finish in 2010.

Priddis repeated that second-place finish in 2011, tying with captain Darren Glass but losing in a countback. He picked up 25 or more possessions a remarkable 20 times during the season, his strong form one of the catalysts for the side's surprising run to the preliminary final.

He turned in another consistent performance in 2012, again leading the side in clearances and tackles and finishing in the top 10 in the Club Champion award despite missing two games through injury.

After twice finishing runner up and coming in the top 10 for six straight seasons, Priddis finally broke through to win the best and fairest in 2013, the year the award was renamed the John Worsfold Medal. Priddis continued to rack up massive numbers in disposals, clearances and tackles, averaging almost 27 possessions for the season.

Having flown under the radar outside of the WA media for most of his career, in 2014 the reigning Worsfold Medallist finally began to receive accolades from the football industry, including a top-10 finish in the Coaches Association award, selection in the extended All Australian squad and even a surprise Brownlow Medal. As a member of the leadership group and one of the oldest players left on the club's playing list, he was one of a number of players to take the captaincy on a rotating basis after the midseason retirement of Glass. Despite being judged the league's best and fairest, he again finished runner up in the club's count, this time losing to Eric MacKenzie.

In 2015 Priddis a better year statistically than his Brownlow-winning season, and was rewarded with All-Australian selection for the first time. He again finished runner-up (to Andrew Gaff in the Club Champion and went within a few votes of another Brownlow, ending up second behind Fremantle's Nathan Fyfe.

He turned in a typically solid season in 2016 but failed to reach the heights of his previous campaign, battling a back injury for much of the year that required post-season surgery. Those battles continued in 2017, with Priddis struggling for form and effectiveness for most of the year as the club struggled to fit both him and new arrival Sam Mitchell in the same midfield. Perhaps seeing the writing on the wall, Priddis announced his retirement late in the year despite having inked a contract extension just months earlier. He retired as the league's all-time leader in tackles and the club's leader in a number of statistical categories including disposals and clearances, his bread and butter.

Retrieved from "https://eaglepedia.fandom.com/wiki/Matt_Priddis?oldid=25453"
Community content is available under CC-BY-SA unless otherwise noted.