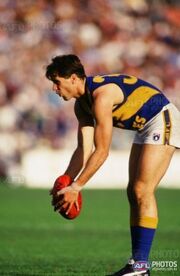 Matt Clape was one of the many players who flew the coop in the early 90s to find success elsewhere after struggling to break into the strong West Coast side of the time.

Drafted from East Perth with a high pick received from North Melbourne in return for the rights to reluctant Eagle Peter Mann, Clape was forced to bide his time at the Royals during his first season as West Coast made their run into the grand final.

It wasn’t until the second half of the 1992 season that he was given his first run in the seniors, in a win against Hawthorn at Waverley. He played another 8 games in his first season but was dropped before the finals and missed out on playing in the premiership, although he did receive the club’s Rookie of the Year award.

The following year he played 14 games, generally off a half-back flank. The best of them came in a close loss to Geelong at Kardinia Park when he had 14 touches, 2 goals and received 2 Brownlow votes.

After a frustrating 1994 during which he played only 6 games, spent most of the year at East Perth and again missed out on the premiership campaign, Clape was delisted. Mick Malthouse commented later that he had hoped the decision to cut him loose wouldn’t “bite us on the bum”, which was prophetic.

Clape was picked up by Carlton in the 1995 pre-season draft and was an instant success at Princes Park, playing an important role in the Blues’ premiership win. He ended up playing 58 games for Carlton between 1995 and 1998 before injuries brought an early end to his AFL career.

Clape spent some time as an assistant coach at East Perth.

Retrieved from "https://eaglepedia.fandom.com/wiki/Matt_Clape?oldid=28447"
Community content is available under CC-BY-SA unless otherwise noted.