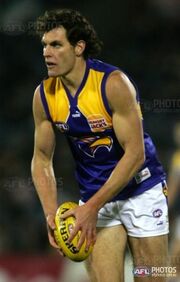 The long-term backup to Dean Cox, Mark Seaby made the most of his limited opportunities, playing in the 2006 premiership.

Originally from Mukinbudin in the Wheatbelt, the lanky ruckman was picked up by West Coast in the 2001 'superdraft'.

He spent his first two seasons learning his trade at West Perth while Cox cemented himself as the backup to Michael Gardiner. After winning a WAFL flag with the Falcons in 2003, Seaby was called up early in 2004 when Gardiner went down injured. He played 17 games for the year, picking up a Rising Star nomination after kicking 3 goals against Hawthorn and winning the club's Rookie of the Year award.

Seaby added another 19 games in 2005, generally preferred as Cox's backup with Gardiner (when fit) being used as a key forward. The tall trio all played in the 2005 grand final but the lack of a true key forward hurt the Eagles as they fell by less than a goal in a low-scoring affair.

With Gardiner on the outer for disciplinary reasons for most of 2006, Seaby assumed the mantle as the club's #2 ruckman. He paired with Gardiner for a couple of games mid-season when Cox was out with a broken collarbone, then became the sole ruckman for a period when Gardiner was axed following a drink-driving incident, before Cox's return. Although he was left out of the qualifying final and played limited minutes during the remainder of the finals series, Seaby nevertheless earned a premiership medal.

Seaby played every game in 2007, but was left out of the side reasonably frequently in 2008 as the club began to experiment with Quinten Lynch pinch-hitting in support of Cox. The situation became infinitely worse in 2009 when young buck Nic Naitanui arrived at the Eagles and quickly surpassed Seaby in the pecking order. Despite Cox missing most of the second half of the season through injury, Seaby played just five games for the year as the match committee preferred a combination of Naitanui and Lynch.

At the end of the 2009 season Seaby, having been spoken about as a potential trade target for a few years, requested a trade to Sydney. He became a Swan as part of a three-team deal which saw Brent Staker move to Brisbane and former Lion Bradd Dalziell shift home to West Coast.

Due to a combination of injury and the strong form of Shane Mumford, who arrived at the club at the same time, Seaby managed just 18 games in three seasons at Sydney, before being delisted at the end of 2012.

Seaby returned to WA in 2013, electing to sign with Claremont rather than return to West Perth. He played three seasons for the Tigers before retiring at the end of the 2015 season.[1] Seaby made a one-off appearance for his junior club Mukinbudin in 2018, but declined a regular spot with the Rams in order to focus on his role as ruck coach for the state under-18 side.[2]

Retrieved from "https://eaglepedia.fandom.com/wiki/Mark_Seaby?oldid=27985"
Community content is available under CC-BY-SA unless otherwise noted.