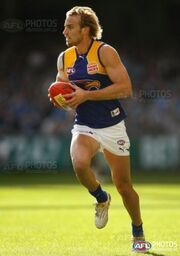 A utility with a booming left-foot kick, Mark Nicoski spent more than a decade at West Coast but was beset by injury.

Nicoski spent the 2003 season on the rookie list, showing good form for Subiaco off a half-back flank. Despite not getting an Eagles debut, he was promoted to the senior list for 2004 and eventually called up in round 5. Nicoski played 11 games as a half-back or wingman before injuring a shoulder.

After starting 2005 in the WAFL, Nicoski broke into the senior side in round 2 and played 21 games for the year, including the grand final where he was among West Coast's best, kicking a goal from 17 possessions. In the first half of 2006 he looked to be cementing a reputation as one of the more exciting young players in the league, before breaking an ankle against Hawthorn at the MCG mid-season. With the Eagles again on the path to the grand final, Nicoski made a desperate attempt to regain his place in the side. The day after West Coast booked their spot in the decider by beating Adelaide, Nicoski played in Subiaco's winning WAFL grand final, his first game with the Lions in more than a year. Unfortunately he was overlooked the following week and watched on as his teammates won the flag.

The injury problems continued in 2007, with Nicoski dislocating a shoulder in the pre-season and missing the first couple of months of the season as a result. After returning via Subiaco, he again injured his shoulder in just his second AFL game of the season. Nicoski was able to get his spot back in the final home-and-away round and played both finals as the Eagles were knocked out in straight sets. Having qualified for the WAFL finals, he was able to play in his second straight premiership with the Lions.

Nicoski managed to stay injury-free in 2008, although a form dip mid-season saw him sent back to Subiaco for a few weeks. He played 19 games at AFL level and finished in the top 10 in the Club Champion award for the first time. In 2009 Nicoski played 13 games, but his season ended early due to a back injury.

His shoulder injury flared again in 2010, with Nicoski struggling in his handful of AFL games before opting for surgery. At the end of the season he was rewarded for his work with some of the younger Eagles by receiving the Best Clubman award.

A role change in 2011 and a rare injury-free run resulted in perhaps the best season of Nicoski's career. Used as a defensive forward, he showed a happy knack for kicking goals at crucial times. Nicoski kicked 41 goals for the year, the third-most at the club behind Josh Kennedy and Mark LeCras and more than double his combined tally in the previous seven seasons. His efforts included a career-best six-goal haul against Richmond.

Unfortunately, Nicoski was unable to continue in his new forward role. A severe hamstring injury in the 2012 pre-season and then complications from the subsequent surgery meant that he didn't play at any level in 2012. He eventually returned a couple of months into 2013, starting with Subiaco's reserves side before moving into the league side. Before he could start to push for an AFL comeback, he broke a wrist which required season-ending surgery. A disappointed Nicoski announced late in the 2013 season that he would not play on.

The popular Nicoski remained at West Coast in 2014 in a welfare role, becoming a development coach in 2015.

Retrieved from "https://eaglepedia.fandom.com/wiki/Mark_Nicoski?oldid=28001"
Community content is available under CC-BY-SA unless otherwise noted.