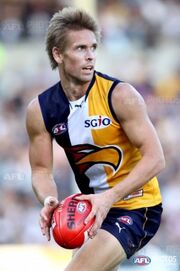 After playing his junior football with West Perth, LeCras was selected by West Coast in the 2004 draft with the pick the Eagles had received from Collingwood for Chad Morrison.

The clever small forward was given a debut midseason, kicking two goals in a rout of Port Adelaide, but was dropped after managing just a single touch the following week and played out the year with the Falcons. In 2006 he played two games midseason amidst another good year for West Perth, before being called up for the final round match against Richmond. That was the game in which he announced himself to the competition, kicking 5.4 from 10 marks to earn a Rising Star award. Unfortunately he had no impact in the qualifying final loss the following week, and lost his spot as the Eagles charged to their third flag.

After playing the opening round of 2007, LeCras went back to West Perth but was able to establish himself in the side later in the year, kicking four goals on a handful of occasions and picking up another Rising Star nom for one such haul, again against Richmond. He finished the season with 36 goals from 19 games, second at the club behind Quinten Lynch.

LeCras played the season opener in 2008 but then missed a large patch due to a groin injury, returning to the side in the second half of the year. It provided a springboard for 2009, where LeCras signalled his intentions to have a big season with six goals in the opening round against Brisbane. He kicked multiple goals in 18 games and finished with 58 goals for the year, including another haul of half a dozen against the Blues. LeCras finished third in the Club Champion count and was unlucky to miss out on All-Australian selection.

That omission was rectified in 2010 when LeCras kicked 63 goals from 21 matches, including a remarkable performance against Essendon where he tallied 12 goals, a record for the Docklands venue and the most by an Eagle since Scott Cummings a decade earlier. In addition to his All-Australian jumper LeCras was a deserving winner of the club's best and fairest.

Disaster appeared to have struck in the opening round of 2011 when LeCras, who had been foreshadowed to move into the midfield, was stretchered from the field with a serious-looking groin injury. Expected to miss several months, he surprised by returning after missing just three games. Despite his new role up the ground he kicked 47 goals for the year, second behind Josh Kennedy, and played his 100th game in the preliminary final. His 2012 season was then over before it began when he suffered an anterior cruciate injury in a pre-season training session that necessitated a reconstruction. Although he was written off for the year, LeCras pushed himself to return for the side's finals campaign, ultimately unsuccessfully.

He then had a horror start to 2013 when he fractured an arm midway through the opening-round derby. Remarkably, LeCras missed just one match, but seemed hampered by his injured arm with his performances after that not up to his usual high standard. Late in the season he missed two weeks with a foot injury, and on his return against Essendon broke his ribs in a marking contest. He managed to kick 5 goals in the second half of that match, after breaking his ribs, but then missed the remainder of the season.

The blonde forward had another interrupted season in 2014, missing four games after re-breaking his arm and then getting suspended on his return when he elected to bump rather than tackle with his injured arm. He finished with 30 goals from 15 games, third behind Kennedy and Jack Darling.

LeCras finally returned to something approaching his pre-knee injury form in 2015, playing every game and kicking 45 goals (second only to the Coleman Medal-winning Kennedy) despite splitting his time between the forward line and midfield. He again played every game in 2016 and finished third in the club's goalkicking, but suffered through patchy form, often going missing against stronger opponents.

That patchy form continued in 2017. Still capable of turning a match, that ability was only rarely on show as LeCras went goalless for a month midseason and was troubled by a nagging hip injury, but still finished third in the club's goalkicking. Given a one-year contract extension for 2018, LeCras began the season strongly, kicking 13 goals in the first five games while averaging four tackles per game. Although his form dropped back after that point, not helped by a wrist injury suffered mid-season, he was still able to play 23 games for the year and finally earn a premiership medal. He announced his retirement several weeks after the 2018 premiership victory, finishing as the club's third all-time leading scorer.

LeCras intended to rejoin his junior club Cervantes in 2019, but his injured wrist, which had not responded as well as hoped to surgery, nixed the plan.[1]

Retrieved from "https://eaglepedia.fandom.com/wiki/Mark_LeCras?oldid=29000"
Community content is available under CC-BY-SA unless otherwise noted.