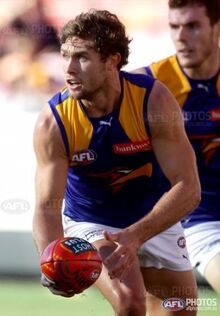 Hard-working inside midfielder Mark Hutchings spent a year on St Kilda's rookie list and then two years plying his trade at West Perth before the Eagles picked him up late in the 2012 national draft.

Originally an East Perth and Coolbinia junior, Hutchings captained the victorious WA under-18s in 2009 before being picked up by St Kilda in the rookie draft. He spent 2010 playing with Sandringham, the Saints' affiliate, in the VFL and was delisted at the end of the year.

Hutchings returned to WA and signed with West Perth. A strong 2011 season was followed by a massive 2012 in which Hutchings won the Falcons' best and fairest and finished runner-up in the Sandover Medal.

Picked up by West Coast with its final selection in the 2012 national draft, Hutchings was forced to bide his time at West Perth until round 7, when the unavailability of Daniel Kerr and Chris Masten opened the door for his senior debut. Although he acquitted himself well, he was dropped the following week when Kerr and Masten returned. The pattern continued throughout the season with Hutchings unable to cement a spot in the midfield despite some impressive performances, including 19 touches and a massive 16 tackles in the round 16 derby, and 26 possessions against the Bulldogs. He played nine senior games but finished the year in the WAFL, where he won the Simpson Medal as the best afield in West Perth's grand final victory.

In his second season, the hard-nosed midfielder became a regular member of the side. After a delayed start to the year due to a back injury and a couple of games at his junior club East Perth, Hutchings broke into the side in round 5 and became an important part of the midfield rotation. In the second half of the year he was used in a tagging role to good effect.

Hutchings had an interrupted pre-season due to a groin injury and made just one appearance (as the sub) in the first half of the 2015 season. He slowly worked his way into the midfield rotation after the bye and his form was good enough to keep vice-captain Scott Selwood out of the side for the preliminary and grand final, finishing with 13 games for the year.

After another injury-interrupted pre-season, Hutchings rebounded to play a career-high 18 games in 2016, proving his value to the side as a clearance-winner and occasional tagger. He went one better in 2017 after spending some time at East Perth in the first half of the season, regularly getting tagging roles against one of the opposition's more dangerous players.

In and out of the side in the early stages of 2018, by the end of the season Hutchings had established himself as one of the league's best taggers, shutting down a number of dangerous midfielders including a superb blanketing job on Collingwood's Steele Sidebottom in the Eagles' Grand Final win. He was rewarded with a maiden top-ten finish in the John Worsfold Medal count, in addition to his premiership medal.

Hutchings continued to perform well in a number of roles, including wingman and defensive forward, in the first half of 2019, but repeated hamstring injuries interrupted the latter part of his year. Continued injuries plagued him throughout 2020, with a knee issue keeping him out of the side until deep into the season, he injured a hamstring in his third match and ultimately could not force his way back in for the club's losing elimination final.

Retrieved from "https://eaglepedia.fandom.com/wiki/Mark_Hutchings?oldid=34070"
Community content is available under CC-BY-SA unless otherwise noted.