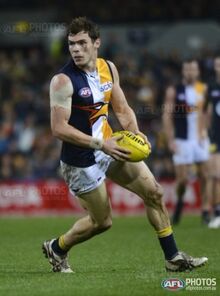 Dynamic midfielder Luke Shuey has overcome a horror start to his career to become an important cog in the West Coast engine room, a Norm Smith Medalist, and eventually the team captain.

Shuey was drafted with a priority pick received in the 2008 national draft, after winning Vic Metro's best and fairest and being selected in the All-Australian under 18 side.

Allocated to East Perth, Shuey's AFL career got off to a terrible start when his sister was tragically killed in a motorcycle accident and he took compassionate leave to return to Victoria to be with his family. After overcoming that as well as a bout of osteitis pubis, Shuey then suffered a broken fibula in his second game with East Perth's reserves, before needing a hernia operation.

The goalkicking midfielder showed plenty of promise in the 2010 NAB Cup and was given a debut in round 1 against the Lions. He immediately impressed, kicking a goal with his first kick and scoring four goals in his first two games, before injuring a knee in the third round. He then suffered a bout of glandular fever, returning late in the season to play the last three games.

Shuey finally overcame his horrible luck in 2011, the explosive midfielder playing every game and averaging 25 possessions and nearly a goal a game, including a 27 possession, 3 goal effort in the second game of the year that gained him a Rising Star nomination, and a five-goal haul against the Bulldogs. Shuey was one of the favourites for the Rising Star, but was pipped by Essendon's Dyson Heppell by just a handful of votes.

He continued to improve in 2012, in particular beating up on competition newcomers GWS (25 possessions, 5 goals) and Gold Coast (32 possessions, 3 goals).

Shuey had an up and down start to 2013, but started to hit form by mid-season. Unfortunately, he suffered a hamstring injury against the Hawks, and played just two more games for the year, both of which ended with Shuey in the red vest with ice on his hammy.

He had a reasonable first half of the 2014 season before coming home with a wet sail in the final seven rounds, playing a big part in the club’s ultimately unsuccessful charge towards a finals berth. Shuey averaged 27 possessions and 7 clearances in those final seven games and carried that form into 2015, averaging over 23 possessions and nearly a goal a game across the season to finish fourth in the Worsfold Medal. Now a senior midfielder, Shuey was one of the Eagles' best in both finals against Hawthorn.

Although the team failed to reach the heights of the previous season in 2016, Shuey took his game to another level, winning his first Club Champion medal and narrowly missing out on a maiden All-Australian selection after being picked in the extended squad. He was instrumental in a number of games, never more so than his 38-possession effort in the narrow win over GWS. 2017 was another strong season, with the newly-appointed vice-captain earning life membership of the club and writing his name into the record books in the thrilling elimination final win with a goal after the siren in extra time to put West Coast into the next round.

Shuey had a relatively quiet 2018, battling regular tags as well as a hamstring injury that ruled him out for a month mid-season, but managed to turn in the occasional vintage performance, none more so than his memorable 34-possession effort in the Grand Final that earned him a Norm Smith Medal to go with his premiership medal.

He continued that strong form into 2019, playing every game including making his 200th appearance in the elimination final win over Essendon, and leading the club in clearances. At the end of the season Shuey was named in the extended All-Australian squad but missed out on the final side, and pipped fellow midfielder Elliot Yeo to win his second John Worsfold Medal. When Shannon Hurn stepped down as captain ahead of the 2020 season, Shuey was quickly named his replacement.

Shuey's first year as captain was the pandemic-affected 2020 season, and his own form was below his best, with the skipper missing a number of games with hamstring injuries. He returned for the elimination final but was quiet as the team lost in heartbreaking fashion.

Retrieved from "https://eaglepedia.fandom.com/wiki/Luke_Shuey?oldid=34136"
Community content is available under CC-BY-SA unless otherwise noted.