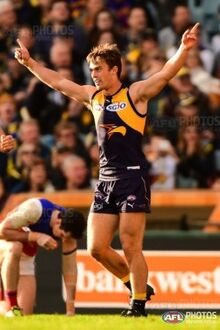 Originally from Eyre Peninsula town Tumby Bay, Partington played juniors with Port Adelaide before a zone shift saw him allocated to Norwood. Despite the tragic loss of his father Brian in a mining accident in February 2015, Partington fought his way back to earn All-Australian honours at the under-18s carnival before being picked up by West Coast.[1]

On being drafted, Partington was described as a hard-working midfielder with good speed, excellent endurance and able to use the ball exceptionally well by hand and foot. Before taking the field for West Coast, he signed an extension to his rookie contract tying him to the club for a third year in a mutual show of faith. Partington spent most of his rookie year in the midfield in East Perth's senior side, showing reasonable form without ever really pressing for an AFL call-up.

He was a strong contributor for the Royals in 2017, eventually being given a senior debut late in the year when his WAFL form proved impossible to ignore. Partington performed well at the higher level despite being played out of position as a forward, and was part of the club's victorious Elimination Final side, although he lost his spot for the following week.

Partington found himself on the outer with the match committee in 2018. Despite putting up big numbers at East Perth and winning the Royals' best and fairest (in a three-way tie with Matthew Allen and Patrick McGinnity), he failed to win senior selection at any stage, and was delisted at the end of the season.

After being chased by a number of clubs in his native South Australia, Partington signed with Glenelg.[2] His chances of an AFL recall improved when he won the SANFL's top individual honour, the Magarey Medal, in his first season with the Tigers.[3]

Retrieved from "https://eaglepedia.fandom.com/wiki/Luke_Partington?oldid=31209"
Community content is available under CC-BY-SA unless otherwise noted.